We have had the pleasure of working on multiple projects for this property over the past few years! It has been great to watch the property change and turn into the native oasis it is today! The most important aspect of this property that the owner wanted to maintain was that all the plantings were native to Central Texas. The back of the property was filled with native plantings around the pool, and the property owner wanted a cohesive look with her beds in the front yard that had become overgrown. We removed the old plants and added in some of the same native plantings that were found in her back yard. Yaupon Holly was added along the property line to provide extra privacy from the neighbors and flowering natives were clustered to make the property more pollinator friendly!

In Two Weeks: Check Us Out On Yard Crashers 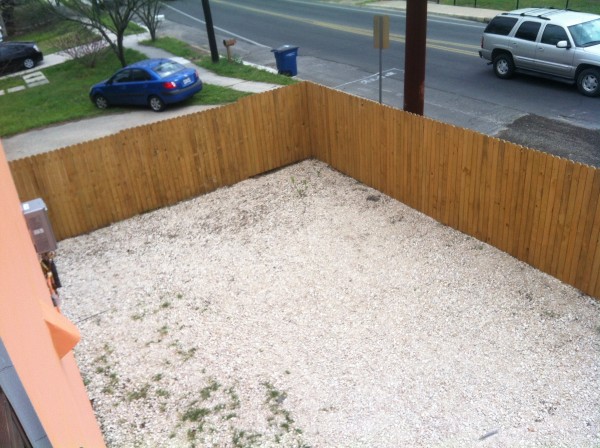 We’ve been sitting on this news for a year now, and are so excited to get to share with you! In two weeks, watch us transform this property in two days on the first ever Austin Episode of Yard Crashers. Monday, June 8th 9pm CST on the DIY Network!

With a passion for entertaining both children and adults, this family needed a flexible and usable space. Additionally, recent construction had changed the family’s greenbelt view, into an industrial eye sore.  Taking cues from the modern interior decorating of the house, we revitalized this tired and tiny back yard into an open and flowing oasis of fun and functionality.

A low maintenance, drought tolerant plant palette was a must for this busy family, and is reflected in our plant choices of ornamental grasses and agaves. A custom constructed swing complements and anchors the play area, without visually invading the overall esthetic of the yard. The swings construction will easily accommodate a hammock as the children get older.  The implantation of bamboo screening hides the new industrial area by blending the space into the surrounding greenbelt. Custom cedar benches provide additional seating and are complimented by large custom metal planters to anchor the space. Removing large areas of struggling grass and replacing it with limestone and black gravel, creates a perfect area for larger groups to mingle.   With distinct areas for children play, adult seating and  “free range socializing” this small space is ready for big parties.

There is so much happening on this project we’ve had to divide it into two parts for ya! Make sure you check out the Front Yard.

Truly, one of Native Edge’s Crown Jewels, this project is one of our all time favorites. When the homeowner moved in, this property’s dated landscape had become a disjointed overgrown mess. The customer’s requirements for this space were to increase the entertainment space, a modern and natural zen feel, better access between the various areas of the yard, and a Art Studio that could double as guest quarters.

We tripped the amount of outdoor entertaining space with three main areas; outdoor living, lounge area, and space for the dogs. A custom gas fire pit comes off the studio area to anchor the entertaining area. The furniture chosen for this section stacks on itself to create a obelisk; when not in use, allows additional square footage for the patio and doubles as an interesting visual.

We brought in our friends at McKinney York Architects to help us design and build this world class studio. For the outdoor shower we designed and built a custom iron shower caddy nick-named “The Butler.” The butler stands at attention, discreetly holding your towels and toiletries while you shower. The studio is anchored by a raised turf area to soften the hardscape, and offer a place for the dogs to lay, while the artist is at work!

There is so much happening on this project we’ve had to divide it into two parts for ya! Make sure you check out the Back Yard.

This Hyde Park cottage had recently undergone a beautiful indoor renovation, and was in desperate need of an outdoor facelift to match.

In the front yard, our primary focus was to create an open and enhanced entry way. We used terracing to build a level limestone walkway that refocused the attention to the entry of the house, creating a more welcoming and usable feel. Terracing also helped us create defined planting spaces for visual interest as well as helping with proper drainage and erosion control. Plants that would grow naturally in the cracks and crevices of the wall were selected to soften the hardscapes, and help reduce the urban heat effect. With the addition of a small water feature, we were also able to provide wildlife with a safe and natural habitat! 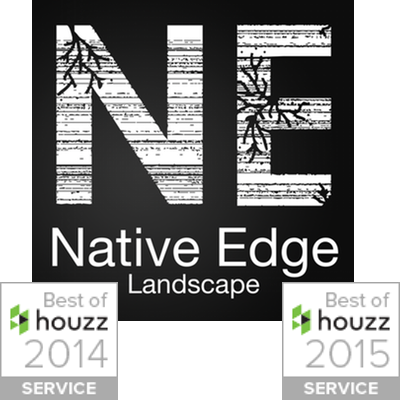 Over 25 Million Monthly Unique Users Rated Top-Rated Home Building,  Remodeling and Design Professionals in the United States and Around the World

Austin, Tx, January 20, 2015 – Native Edge Landscape of Austin has been awarded “Best Of Houzz” for Customer Satisfaction by Houzz, the leading platform for home remodeling and design. The local landscape design/build firm was chosen by the more than 25 million monthly unique users that comprise the Houzz community from among more than 500,000 active home building, remodeling and design industry professionals.

This is the second year in a row, that Native Edge Landscape has been bestowed with this honor.

The Best Of Houzz award is given in two categories: Design and Customer Satisfaction. Design award winners’ work was the most popular among the more than 25 million monthly users on Houzz, known as “Houzzers.” Customer Satisfaction honors are determined by a variety of factors, including the number and quality of client reviews a professional received in 2014. Winners will receive a “Best Of Houzz 2015” badge on their profiles, helping Houzz users around the world who discover and love a professional’s work to learn even more about that business’ popularity and satisfaction rating among their peers in the Houzz community.

“We are so excited to once again receive this award!” said Rodney Stoutenger, President and Lead Designer of Native Edge. “Each year we strive to push our company to higher and higher levels of excellence. I’m so proud of my team and the hard work they have put into making this company a success.” Stoutenger adds “From the beginning, this company has been about doing things differently. This positive response really speaks to the level of commitment we have for our customers.”

Native Edge Landscape, was founded in 2008 as Owner Rodney Stoutenger became more and more frustrated with the hassles commonly plaguing the residential landscape industry. “I wanted to fix the disconnect between the design, installation and maintenance of projects,” said Rodney. “Often a designer hands off their work to a customer and they are left to fend for themselves. A new landscape is already a heavy investment, and having to coordinate the frustrating process of installing the landscape should not be a headache for the customer to take on. At Native Edge Landscape, we provide an integrated and personalized process, walking with the customer through every step of the operation.”

“Houzz provides homeowners with the most comprehensive view of home building, remodeling and design professionals, empowering them to find and hire the right professional to execute their vision,” said Liza Hausman, vice president of community for Houzz. “We’re delighted to recognize Native Edge Landscape among our “Best Of” professionals for customer satisfaction as judged by our community of homeowners and design enthusiasts who are actively remodeling and decorating their homes.”

With Houzz, homeowners can identify not only the top-rated professionals like Native Edge Landscape, but also those whose work matches their own aspirations for their home. Homeowners can also evaluate professionals by contacting them directly on the Houzz platform, asking questions about their work and reviewing their responses to questions from others in the Houzz community.

Native Edge Landscape, LLC is an Austin, TX local landscape design company focusing in eco-friendly landscape design and practices. They specialize in utilizing green gardening techniques such as native and drought resistant plants, xeriscaping, and recycled/local materials. Offering design, installation and maintenance services, their goal is to make make every step as seamless as possible for the homeowner.

Houzz is the leading platform for home remodeling and design, providing people with everything they need to improve their homes from start to finish – online or from a mobile device. From decorating a room to building a custom home, Houzz connects millions of homeowners, home design enthusiasts and home improvement professionals across the country and around the world. With the largest residential design database in the world and a vibrant community powered by social tools, Houzz is the easiest way for people to get the design inspiration, project advice, product information and professional reviews they need to help turn ideas into reality. For more information, visit www.houzz.com

AUSTIN – Even with the recent rain in Central Texas, it hasn’t fallen in the right places to help alleviate drought conditions.

The Austin Water Utility is hoping for the best but planning for the worst, and one business says homeowners are preparing, too.

As little as one year ago, convincing a homeowner to convert to a xeriscaped yard, a process that uses native plants that naturally need less water, would have taken a strong sales pitch, according to Native Edge President Rodney Stoutenger.

“We used to have to give the ‘native speech’ on why it’s beneficial, we no longer have to do that it’s typically brought to us,” he said.

There’s been a fundamental shift, he says, in his customers’ attitudes, no longer prioritizing growing green as much as going green.

“People are relieving themselves of the duty of having a green, pristine, estate lawn to switching to a drought tolerant landscape,” said Stoutenger.

A smart move as lake levels continue to drop.

As of Jan. 15, Lake Travis and Lake Buchanan are about 34 percent full, low enough to keep Austin in stage two restrictions.

A tough transition, she acknowledges. Austin Water put it to the public Thursday night: help us find a compromise.

Gross says depending on feedback, that could include additional regulations on business like carwashes and landscapers.

They also want the public’s help to establish a lake level trigger for stage four restrictions. Currently, none exists.

Thursday was the first of two meetings on this issue tonight. The second meeting will be held Feb. 19. Austin Water is aiming to have a fully formed plan for what additional stage three restrictions could look like by March 1.

Stoutenger agrees, creating tiers within stage three would be helpful.

“I think jumping from stage three to stage four without any tiers or without any step in between will be very drastic. And I think there’s going to be backlash,” said Stoutenger

In the meantime, there are other ways to cut back. He estimates a xeriscaped yard uses about 50 percent less water than a traditional lawn.

For installation on this weeks project, a 1,200 gallon rain tank! 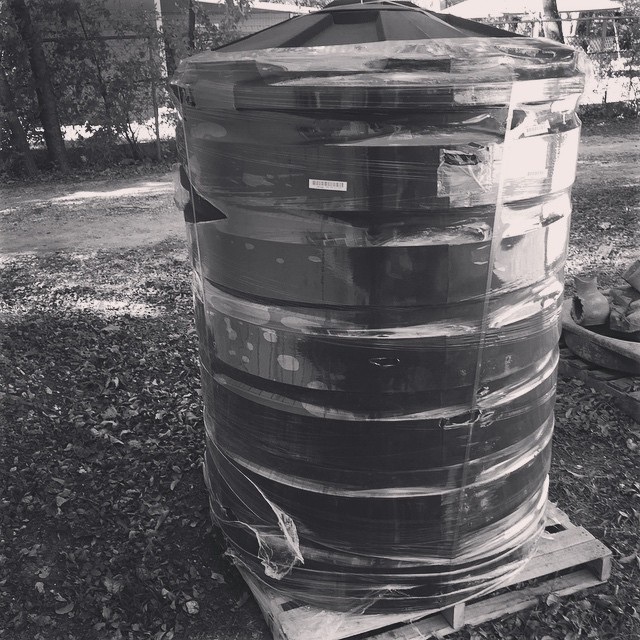 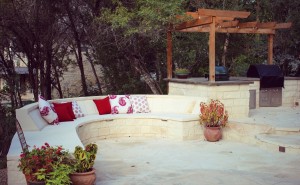 After completing pool construction several years ago, these home owners wanted to extend the functionality of their existing limestone pool deck by adding additional lounging space and increasing the outdoor living area.

The patio includes an 18 foot built in stone bench designed for lounging by the pool and sun bathing. The kitchen features custom pored concrete countertops, a “big green egg” grill, 32 inch cooktop, and a custom cedar pergola for shade.

See the progress of this project on our blog! 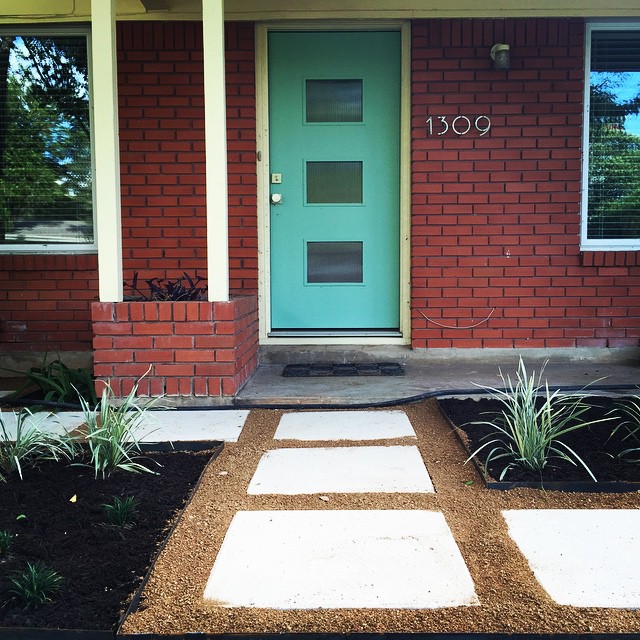