Project Transitions: Changing Lives One Plant at a Time

Before the 1980’s not much was known about the virus we refer to as human immunodeficiency virus (HIV), or the terminal illness it would develop into, acquired immune deficiency syndrome (AIDS). Today, however, kids learn about HIV/AIDS as early as elementary school, and thanks to advances in medicine it has since been downgraded from a “terminal illness” to a “manageable chronic disease.” Unfortunately, the symptoms of HIV/AIDS can actually make it difficult for people to receive the treatment they need. Mainly, increasing difficulty in finding and keeping a job. Without a steady income people can struggle to pay for housing, food, clothes, and toiletries. Under those conditions, even people with health insurance can have trouble keeping to a medication schedule! That’s where Project Transitions steps in. Project Transitions is a non-profit organization located in Austin, Texas whose main mission is to support people living with HIV/AIDS by providing them with, “supportive living, housing, recuperative and hospice care.” This not only means they provide affordable transitional housing, but they also provide services that help them apply for permeant housing and get them closer to living an independent life. 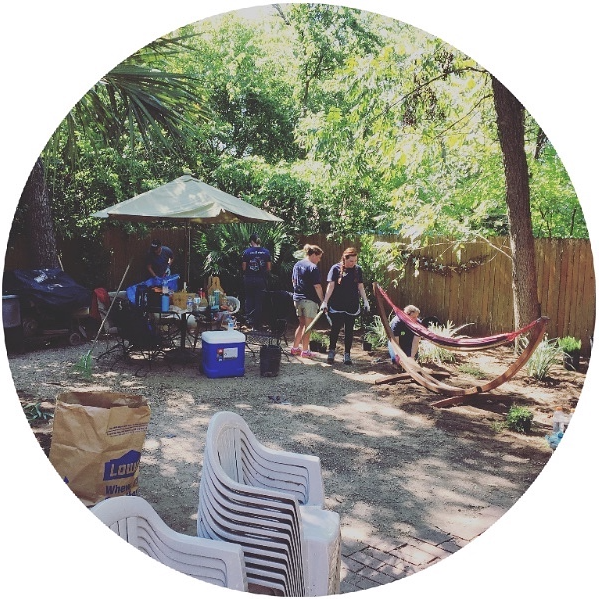 Work in progress. Here we are finishing the install on Doug’s House.

Project Transitions was first created in July of 1986, by Barbara Davis, as a hospice for people dying of AIDS. Named, “Doug’s House”, the hospice was created to be a place where people could spend their last days in a caring and loving environment, with the belief that quality of life is just as important as length of life. Here at Native Edge, we strongly believe in that message too. That’s why when we had the opportunity to join in HomeAway’s “Day of Caring” for another year, we teamed up with Project Transitions to create a new backyard for the residences at Doug’s House.

Our aim was to create a beautiful and natural space that would help the residences heal, relax, and feel more at home in the world. Studies have shown that just five minutes outside can reduce anxiety, anger, and yes even pain! This mood booster can even boost your immune system, which for HIV/AIDS patients is a critical step in the right direction (1). I spoke to our president, Rodney Stoutenger, about the project and he said that what he was really grateful for was being able to connect people back to nature. “When we started working at Doug’s House everything was overgrown and dead, because it had probably been planted nearly ten years ago, but within eight hours we were able to completely transform the space into something that could truly improve the lives of the people living there.” Native Edge has been working with Project Transitions for three years, and Rodney has several friends who’ve used the program, so working with them has always been a really personal experience for him. “Project Transitions is always incredibly grateful for any volunteers they can get, and I’ve been fortunate to have the opportunity to volunteer for them.” And we’re excited for what our futures together will bring.